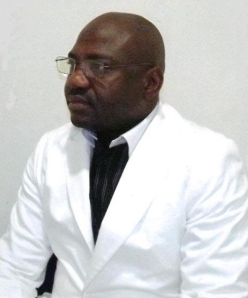 Adebowale Ojowuro, a native of Nigeria, is the author of The Crisis of Religion and Echoes of Common Sense. I recently had the pleasure of speaking with him about his literary work, as well as the important role he plays in the freethought movement through his writing and activism. Enjoy!!!

What is the motive behind the title of your latest book—Echoes of Common Sense—and what special stories have you shared with readers in the new book?

Let’s admit it, common sense is undoubtedly the major casualty in religious aspects of human life. Despite being at liberty to exercise the aptness of reason, the fundamental theology that binds humanity to religious beliefs continues fallible. It’s mind boggling to conceive how recurrent ignorance from past ages still largely compels complacent imbecility upon modern humans. This, openly, has become a disturbing question for ethics in several communities of rational minds. It is upon this alarming spectacle of irresponsible ignorance—that I yet again decide to echo another voice of reason, from a bleeding heart that’s been harrowed by the foulness of religion, to kindle the common sense of the people to the decency of holding the right belief.

Could you give a brief description of your new book?

As the wise saying of a popular British proverb goes, “One pound of learning requires ten pounds of common sense to apply it.”  No one can deny the incisive wisdom of this commonsensical proverb, which accurately describes the depth of the chronic imbecility that’s emblematic in human nature. Just imagine how the tyranny of faith has cunningly kept the vast majority of humankind in ignorance of the truth. I very much recognize ‘Echoes of Common Sense’ as a realistic exposition founded on moral science. To me it symbolizes the algebra and mathematics of ethical laws, genuinely conceived in liberty of rational thoughts. The book is a critical philosophy on ethics and morals – the very discipline of ideal human character that should, at all times, dwell in safe custody in every admirable society.

You certainly must be aware that what may be considered morally right to one may be wrong to another. How then do we determine what that moral right actually IS?

The incontrovertible fact is that the morality of believing what is right is hopelessly in a murderous state of extinction in the human society. According to David Stevens, “A lie is a lie even if everyone believes it.” Conversely, the truth is also the truth even if nobody believes it. You will agree with me that majority of otherwise intelligent humans have disturbingly regressed into credulous beings that preferred consolation in believing absurd fairy-tales, simply because they seem the most unreasonable. This is a very baffling condition in the human culture. It is baffling to such a fault that one begins to wonder where exactly have people thrown the bulk of enlightening knowledge they’ve acquired for several years in learning institutions. According to Webster Dictionary, “ethics is the science of moral duty.” The morality of truth should be a sacred ethics that is wholly erected upon the credit of honesty and legitimate authority in any civilized society. Is this the case with what we have with religions and their respective theologies? The answer is a resounding no!  At this age of reason, every individual mind ought to be on familiar terms with the essence of their moral duty by recognizing the plain truth that, myth is not fact, dogma is very far from ethics, and morality comes only from rationality and not the extent of one’s religiosity.

What impact do you think your book will have on humanity as a whole?

As Aristotle has aptly observed, “Recognition, as the name indicates, is a change from ignorance to knowledge.” It is my strong conviction that humanity will possibly have a great deal of beneficial expeditions through the pilgrimage of life when people begin to see things the way they truly are, and do things the proper way they should be done. ‘Echoes of Common Sense’ will go a long way in helping Africans remove the inferiority of ignorance from their community if majority of the people make efforts to read the book.

Religion is very commonplace in Africa – from traditional cultural practices to Judeo-Christian customs. Please explain why you chose not to partake in any of these belief systems.

This is simply because I do not want to waste my time worshipping imaginary gods that do not exist. That word “god” is a big symbol of deceit in the confederation of organized religion. The god of religion is merely a literature god that answereth prayers only on the pages of that big, black book containing outrageous lies from cover to cover; and perhaps on the screenshots of African Magic Movies. Honestly I do not intend wasting my time invoking a phantom with no remedial values at all.

Please tell us about your path to Atheism/Freethought.

Although, I was born into the Christian faith, dragged to church every Sunday as a little kid, but I will say my Atheism is inborn. From my early days, I’ve been sceptical of the story of Jesus and Mary, the serpent and Eve, angels and demons, and the chronicles of holy Prophet Moses who is continually liable for brutal wars at the command of a righteous god… These stories just do not read well at all; they appeared to me as a bunch of organized superstitions. My scepticism grew worst when I left a much healthier Christian assembly in the Anglican Church to join these so-called Pentecostal churches where pastors directly proclaim people saved once they’ve merely recited the ‘repeat after me sinners prayers’. And, the next day, this ‘saved’ Christian, if he’s a farmer is, as usual, back to his farmland cultivating his Indian-hemp plantation. Nothing in his habit and life routine has changed in any point of fact; yet he’s born again and saved by the blood of Jesus. Again, as Isaac Asimov has correctly observed, “Properly read, the Bible is the most potent force for Atheism ever conceived.” I will rightly say I became an Atheist that no evangelical propagandist can dribble just anyhow from the very moment I began reading the bible with incisive attention.

Why do you think there are few Atheists in Africa?

You see, Atheism is an institution where ignorance is simply not available. The biggest problem in Africa is that people are inexcusably contented with not understanding the world they live in; this is a bad reflection of acute ignorance at work. Unfortunately, our people are still very much overwhelmed with inferiority of ignorance from past ages; otherwise, Atheism ought to be the most popular movement in the continent, if not for anything, but as a protest movement against a dummy god that organized religions have imposed upon their lives by deceit. The truth of the matter is that a lot of widespread misconceptions and tainted opinions about Atheism have been deceitfully impressed upon the minds of Africans by advocates of dogmatic faith. Atheism is indeed the potent antidote to this poison of dogmatic faith, therefore, Africa is the new battleground for Project Reason, in order to free souls held in bondage by imprudence of faith based unreason.

Do you anticipate a rise in Atheism in Africa?

It is undoubtedly true that the variety of dogmatic religions operational in Africa and their respective gods have miserably disappointed Africans. It is very evident from Cape to Cairo that nothing fails like prayers. Where, exactly, is the evidence of any god that reacts to prayers in a continent that’s entirely beset with misery, hunger and poverty? In short, the goodness of the god of organized religion cannot be observed in any valid sense throughout the length and breadth of the African continent. I dealt extensively with this issue in several pages of Echoes of Common Sense. Just imagine the top level to which Africa would have by now progressed if all the time they waste in the worship of imaginary gods that do not exist, invoking a phantom that absolutely has no remedial values to their numerous crises, is used in the pursuit of a worthwhile cause, as the Chinese, Japanese and Europeans have done. I foresee the Atheists movement becoming an all-embracing association for majority of reasonable Africans once the immense veil of misconception is removed from their eyes of reason.

How can we at Black Nonbelievers help to increase and promote awareness of secular values in the continent of Africa?

The way to change a society is to impart rational thoughts into the minds of the people. As I’ve earlier asserted, Africa is undoubtedly the new battleground for Project Reason. Our society needs to change for the better; but a society can only change when the people change their thinking. Ignorance can be easily defeated when people’s thoughts are correctly transformed to order through the means of new information. I remember when this bizarre syndrome of ‘Born Againism’ was bit by bit engulfing the Nigerian nation, the Gideon International aided its rapid spread by flooding every corner of the country with free copies of the bible; even my grandmother who cannot read had a free copy of the Gideon’s Bible. The Black Nonbelievers, Atheist Alliance International, American Atheists, the British Humanists Association, the Foundation Beyond Belief, and every other charity organizations funded by Atheists can also help to increase and promote awareness of secular values in the continent of Africa by flooding hotel rooms, hospitals, and public libraries, etc, in the continent with several of the freethought related books available out there. This effort will significantly aid the spread of rationalism amongst Africans.

Where can we find your literature?

Interested readers can place order for my books in most of the leading bookstores in the US, Canada, Australia, South Africa, India, New Zealand, UK and several EU countries. If readers cannot find the books in-store in their locality, they may simply ask the shop attendants to order it for them. The Paperback and Kindle edition are also available for online order from Amazon.com, Amazon.co.uk, Fishpond.com.au, Kalahari.com, etc. All online orders through ‘The Book Depository’ ship freely to any part of the world.